Ever wondered what the future looks like? Over the next two weeks people visiting Greenwich will get a genuine glimpse into the future… And it’s electric!

Over the next couple of weeks GATEway are testing out driverless vehicles in Greenwich, London. Members of the public will get their chance to experience the future for themselves and travel in a fully automated shuttle bus! The revolutionary prototype goes by the name of Harry (named after John Harrison, an English clock maker who was awarded the Copley medal for his contributions to science).

As you would expect, safety and security are of the utmost importance for The GATEway Project. Harry is fitted with sensors that surround the vehicle and continually assess the surroundings. The sensors are able to detect and react to any potential hazards. If you’re still struggling with the idea of travelling in a computer-driven automotive, rest assured that Harry doesn’t actually go over 10mph and there is a trained person on board who can manually stop the shuttle at anytime.

As an additional safety measure Harry is accompanied by safety marshals and that’s where VOLT enter the story. Senior project manager for The GATEway Project Ben Dodds came into our London Bridge Showroom and explained the issue. Harry is powered by an electric motor and he can drive around for hours on end. The safety marshals who have to follow him however aren’t motorised or battery powered and needed a little assistance! Naturally our team at VOLT™ had the perfect solution, in the form of our hybrid e-bike, the Pulse!

Over the next three weeks around one hundred people will get the opportunity to test Harry and take a trip along a two mile route in Greenwich. The waiting list for the trial exceeded five thousand applicants!

The project is led by the Transport Research Laboratory and funded by both government and industry. Those behind the project envision it being used on a trial basis by 2019, with the potential of implementing the project in other locations afterwards.

Professor Nick Reed, academy director at TRL, said: “This research is another milestone in the UK’s journey towards driverless vehicles and a vital step towards delivering safer, cleaner and more effective transport in our cities.”

But if you want to experience revolutionary transportation now… Then why not book a test ride on one of our VOLT™ electric bikes! 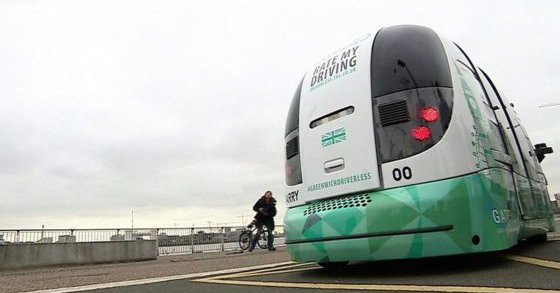